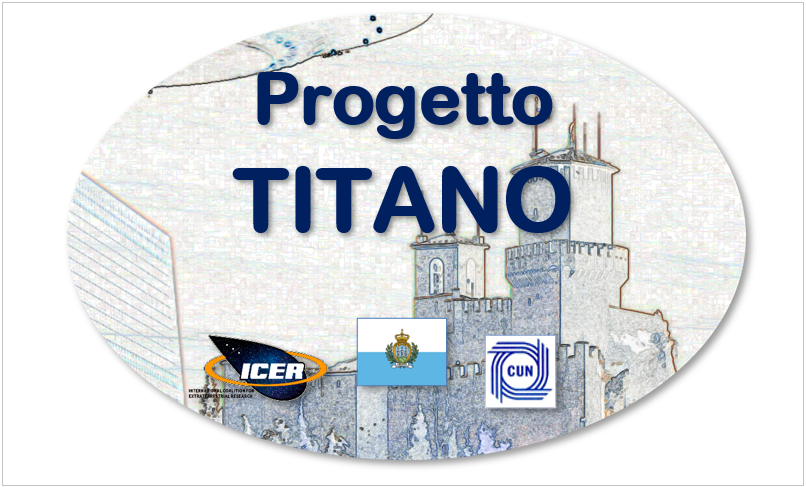 The Guaita tower in San Marino city, the NYC UN building and a UFO appear together with the flag of San Marino and the logos of ICER and CUN in Project Titan’s logo. (from author’s documents)

This article describes a different strategy that ICER and CUN, the proponents of Project Titan, have decided to adopt toward San Marino authorities regarding its possible participation in the Project. 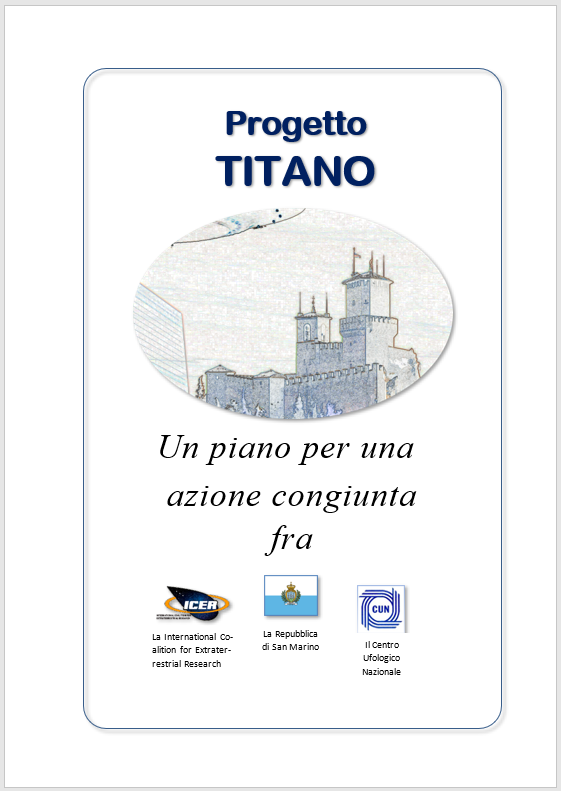 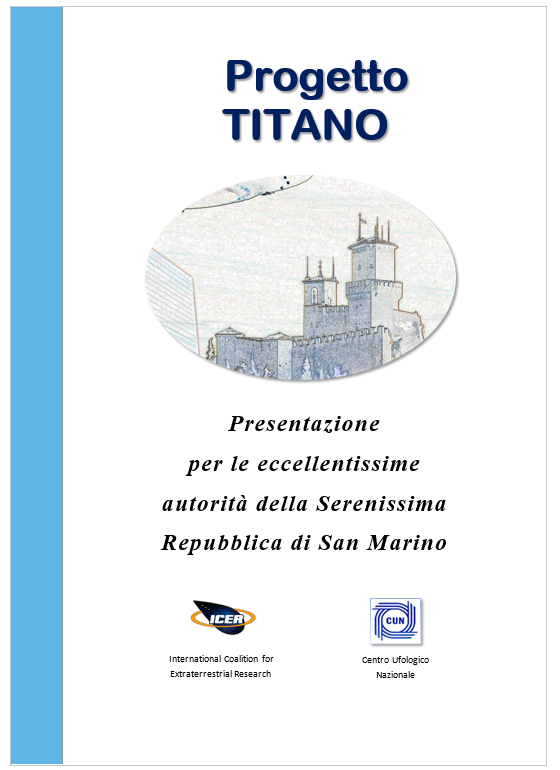 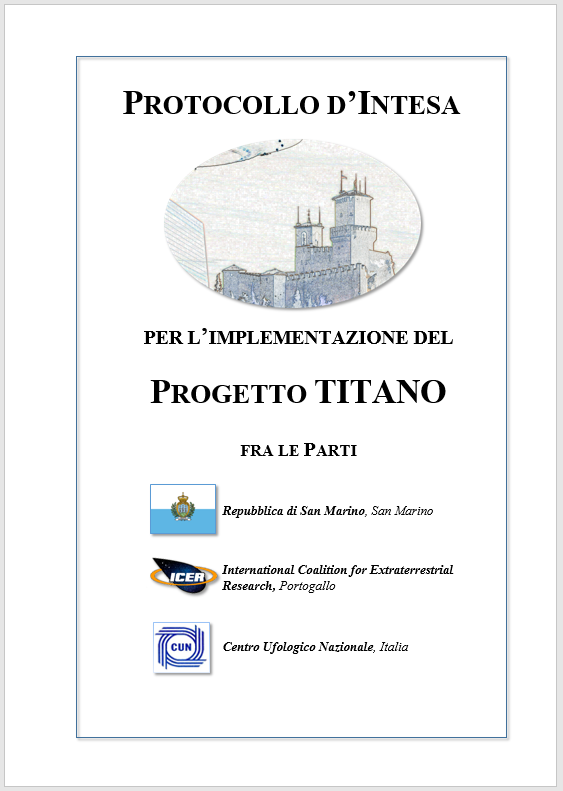 The three documents that compose Project Titan: Project, Presentation and Memorandum of Understanding (from author’s documents)

I had previously reported on the genesis and developments of the action plan called "Project Titan" in a couple of articles on this blog, dated December 12, 2021 and January 12, 2022, respectively, to which I refer for full details. In this article I will describe an important change in the strategy aimed at San Marino's (possible) participation in the Project. Before describing this new strategy, however, I would like to provide a summary of the most important elements that characterize the Project and its history.

Project Titan is a recent initiative with a rather distant origin. In fact, it was in the mid-1970s when Sir Eric Gairy, the young leader of the small Caribbean island of Grenada, aware of the global reach and enormous potential of the phenomenon of unidentified flying objects, conceived the idea of bringing it to the attention of the highest forum of humanity on Earth, the United Nations. 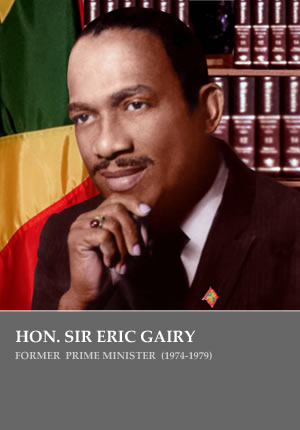 Developed over several years starting in 1975, Grenada Prime Minister Sir Eric Gairy's initiative led to a concrete, if partial, result in the form of Resolution 33/426 of 1978, where "The General Assembly invites interested Member States to take appropriate steps to coordinate on a national level scientific research and investigation into extraterrestrial life, including unidentified flying objects...". Not quite what Gairy wanted, but at least a first concrete result as part of his larger effort, which was aimed at getting the UN itself to study UFOs. In March 1979, however, a coup ousted Gairy, and with no other state interested in his initiative to bring UFOs to the UN, it inevitably ended up stalling.

Many years passed until Roberto Pinotti, one of the creators of the Centro Ufologico Nazionale (CUN) and then its president, realized that the characteristics of San Marino made it the ideal place to revive the spirit of Sir Gairy's project. Pinotti was well acquainted with the small republic for personal reasons and, armed with the knowledge of Sir Gairy's initiative at the UN, made some attempts on a personal level to induce the government of the small republic to bring the UFO/UAP topic to the attention of the UN. But, as it was for the Republic of Grenada in '78, neither was the time ripe for the Republic of San Marino in the late 1990s. Pinotti's various attempts to do so did not get beyond the stage of verbal proposal.

Many more years went by, and it was only after the disclosure process that informally begun in late 2017 had proved to be no fatuous fire that yours truly, certain that times were now changing for real, began to roll up his sleeves to try to find a way to bring to fulfillment the wish of first Sir Gairy and then Roberto Pinotti: to bring UFOs to the UN.
After a rather long and tortuous process of which I report in this article, Project Titan has taken shape.
The Project calls for San Marino to submit a request to the UN for the establishment of an office responsible for the organization of a World Conference, to be held by San Marino and in its territory, to take stock of the state of research on the UFO phenomenon, serving as the core of a genuine international research effort on the phenomenon.
The choice of San Marino is based on the fact that the small and ancient republic is no stranger to UFO/UAP issues as it has been hosting the International Symposium on Unidentified Flying Objects and Related Phenomena, organized by the Centro Ufologico Nazionale thanks to the sponsorship of the Secretariat of State for Tourism, for some 30 years. San Marino, famous for its philatelic issues, has also dedicated two stamp issues to the UFO theme in 1997 and 2013. But above all, the most relevant factor in the context is San Marino's neutrality, an extremely valuable feature for an international cooperation project such as the one envisaged by the Titan Project. 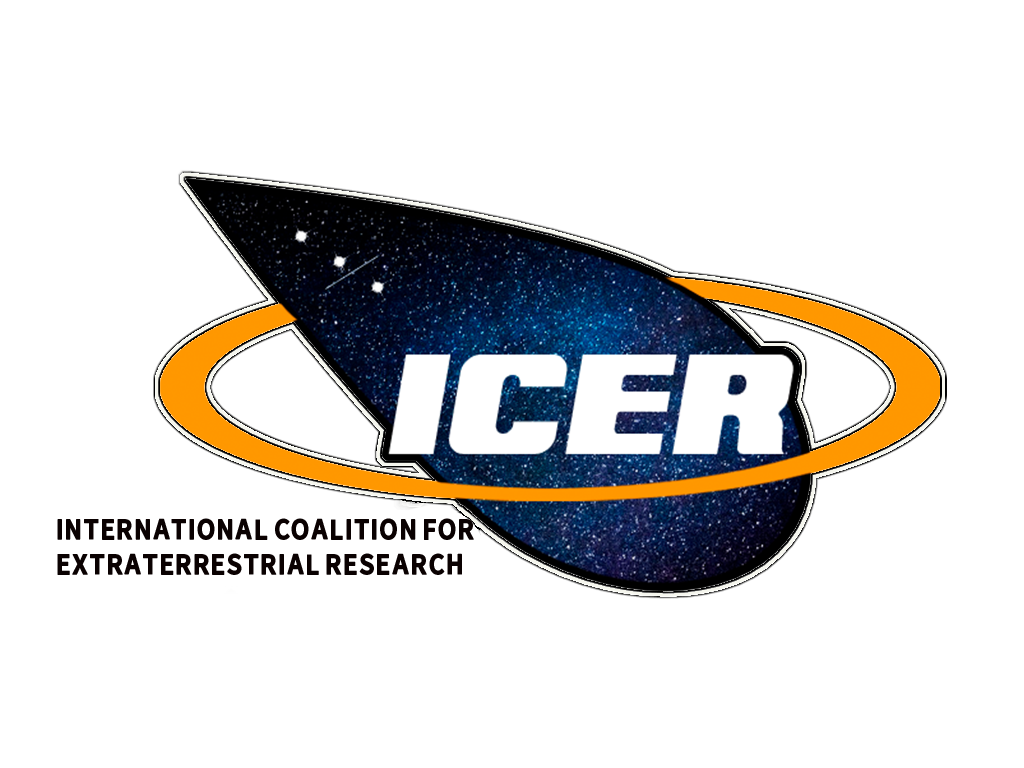 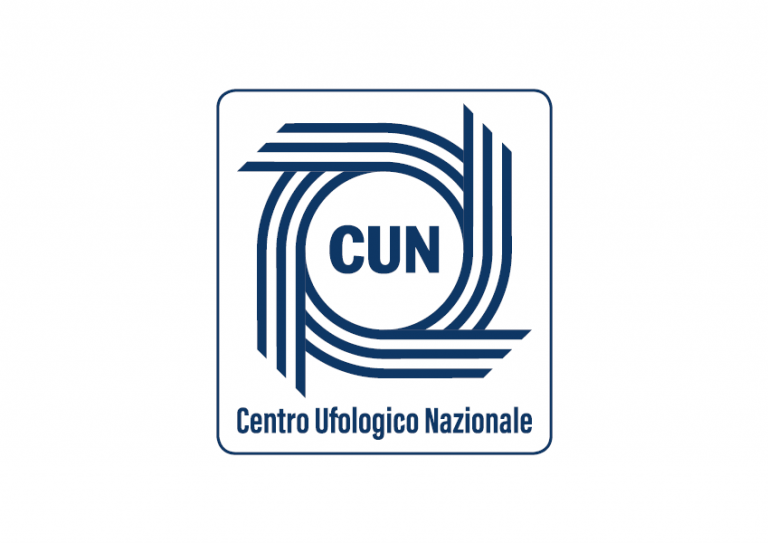 The logos of the International Coalition for Extraterrestrial Research (ICER) and of the Centro Ufologico Nazionale of Italy, the two driving forces behind the Project Titan initiative

Finally, the Project envisages that its two proponents, ICER and CUN, will place their considerable wealth of knowledge, experience and resources at the full disposal of the Republic of San Marino for the purpose of supporting its authorities for whatever may be necessary during the practical implementation of the Project (from the diplomatic aspects related to action in the UN framework to specifically ufological aspects to contacts with the media, etc.).

Around early September 2021 the Project was then finalized by this author and in mid-September 2021, in the aftermath of the 30th World Symposium on Unidentified Flying Objects and Related Phenomenologies, a joint delegation of ICER and CUN informally presented the Project to the Secretary of State for Education and Culture, University and Scientific Research, and Youth Policy of San Marino.
The Project was also informally presented by Dr. Roberto Pinotti, current President of ICER and CUN, to the Captains Regent, Their Excellencies Franesco Mussoni and Giacomo Simoncini, at a meeting held in mid-December 2021 that I report on in this article.

Around spring of 2022 it became evident that a new strategy was necessary, because, despite the interest shown on a personal level by these authorities, the method of informal presentation of the Project is not the most suitable for a project of this magnitude. 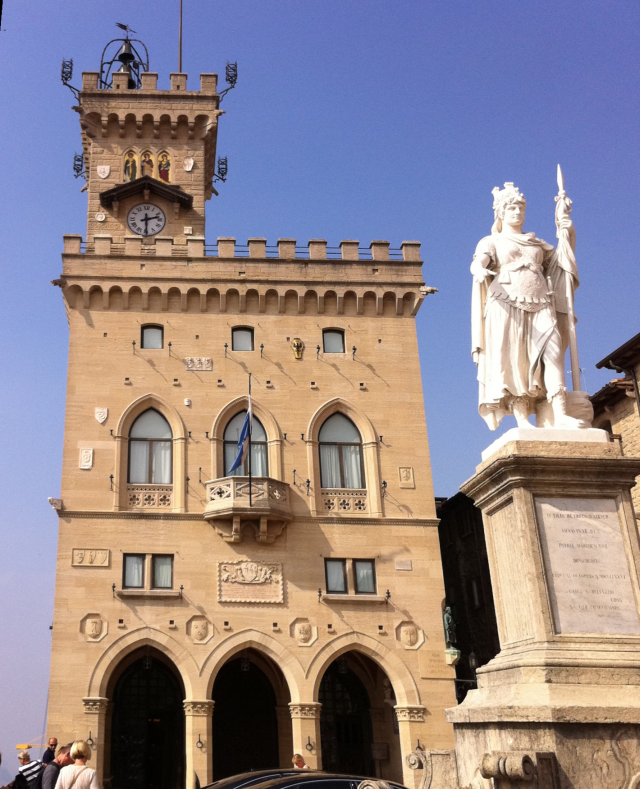 Thus, the undersigned set out to find a more suitable instrument for the purpose.
The tool was identified in an ancient institution of direct democracy of the Republic of San Marino: the Istanza d'Arengo, which is essentially a popular petition.
The Istanza must be addressed to the Captains Regent, the two Heads of State of San Marino, and must be submitted on the first Sunday after their installation. Upon receipt of the Petition, the Captains Regent assess its compliance, particularly verifying that the essential requirement of public benefit is met. If the outcome of the evaluation is positive, the Captains Regent formally transmit the Istanza to the Great and General Council, the single-chamber Parliament of the Republic, which is then required to debate the Istanza. At the end of the debate, the Great and General Council makes a pronouncement by a vote on granting the request contained in the Istanza d'Arengo. In the event of a positive outcome, such pronouncement becomes the subject of a special resolution, which entails a commitment for the Congress of State ( that is, the Government) to act accordingly in order to carry out the will expressed in this regard by the Great and General Council.

In this way, if San Marino were to approve participation in Project Titan, its participation would occur on the basis of popular demand and as a result of the stated will of the people's elected representatives.

Again acting in coordination with ICER and CUN leadership, once I got green light for this new strategy I finalized the text of the Istanza, which will be submitted on October 2 by a San Marino citizen working with the Project proponents.

At the local San Marino level, the submission of the Istanza will be preceded by an action aimed at appropriately informing and raising as much awareness as possible among the San Marino citizenry, as well as gathering as many signatories as possible, which will be carried out by San Marino collaborators.

At the international level the undersigned, again in coordination with the ICER and CUN leadership, has planned a supporting collateral action. This action has been given the name International Public Petition (IPP). The IPP is based on a web platform I have developed that allows people to send a pre-packaged message in which the petitioner expresses his or her wish that San Marino agree to participate in Project Titan.
Interested persons can thus easily access the IPP platform, click on the appropriate link and just add their name, surname and location to the pre-packaged message that opens, and send it. The massege comes with the email addresses of the Great and General Council and the Ministry of Foreign Affairs of San Marino, with in cc the address of the organizers. The platform is available in Italian, English, French, Portuguese, Spanish and German. Whatever the language version, the text of the pre-packaged message is in Italian. 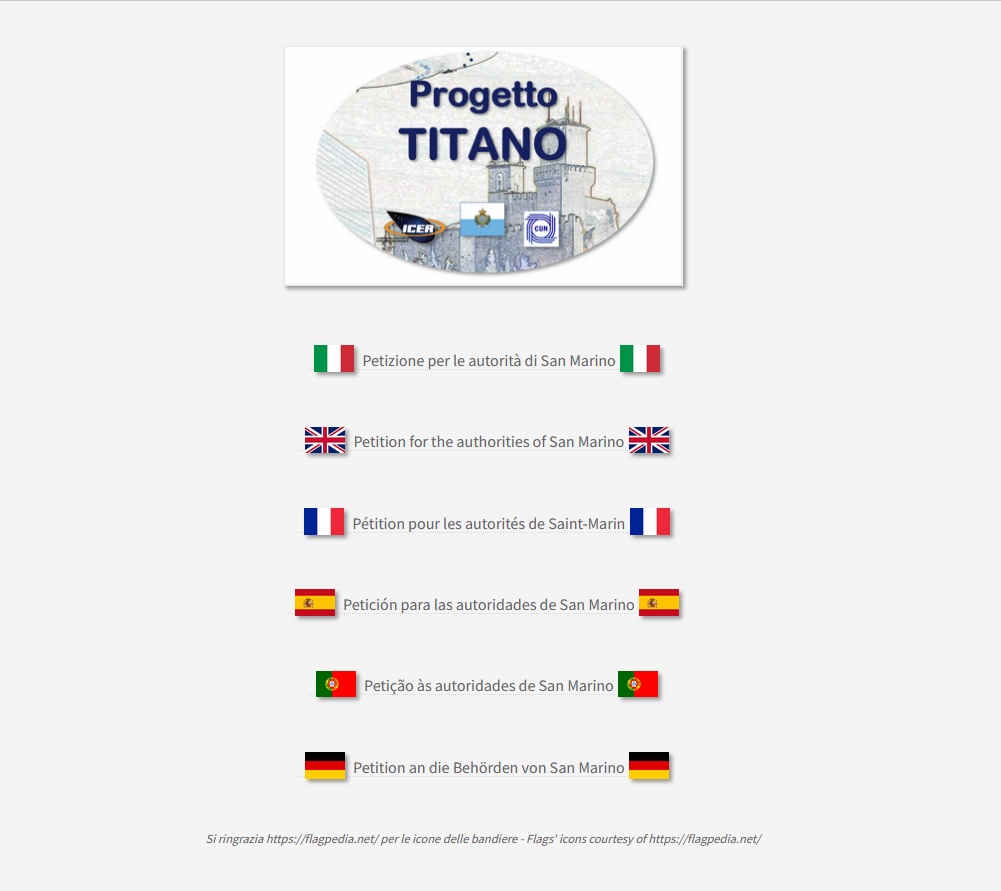 While this international petition has no legal value for San Marino, it is designed as a measure of external support for the Istanza d'Arengo initiative, aimed at demonstrating to San Marino authorities the great interest that the Project has already been receiving around the world.
The IPP web platform will be operational for the entire month of September 2022.

Aware of the commitment that participation in the Project could entail for San Marino, but also of the benefits that it could bring to the Republic, I trust that I have done my best to enable ICER and CUN to offer San Marino a promising opportunity, and to empower San Marino decision-makers to exercise as responsible and informed a choice as possible in the interest of their Republic.
I sincerely hope, both personally and as a member of ICER and CUN, that this new strategy will lead to San Marino's participation in Project Titan. The basic premises are already there by now: the concrete reality of the UFO - or UAP if you prefer - phenomenon has been officially confirmed and it is now being taken seriously at the level of mass media, public opinion and institutional bodies worldwide.
The time is ripe and the time to act is now. What is needed now is a further leap forward: we need to bring the phenomenon into the light of day in order to study it scientifically at the international level. I believe I can say that Project Titan has all the necessary characteristics to achieve the above, and that San Marino has the ideal characteristics to be the backbone of such an initiative.
If the San Marino Parliament decides in favor of participation, then we will witness a truly epoch-making leap forward for the UFO/UAP phenomenon as a whole.

In moving toward the conclusion of this article then, I am more pleased than ever to recall the words used to conclude the previous ones:

The enchanting, neutral setting of the city of San Marino and its Mount Titan, both UNESCO World Heritage Sites, could truly become the new "Geneva of UFOs"

A view of the Guaita Tower in San Marino City, one of the symbols of San Marino (Foto di Matteo Panara su Unsplash)

Well, this article ends here. I wish to thank readers for their attention and refer to the next step of the new strategy, that is, to September 1st when the IPP Campaing will start, of which I will give news via this blog and via my Twitter account, also making known the web address of the relevant platform. 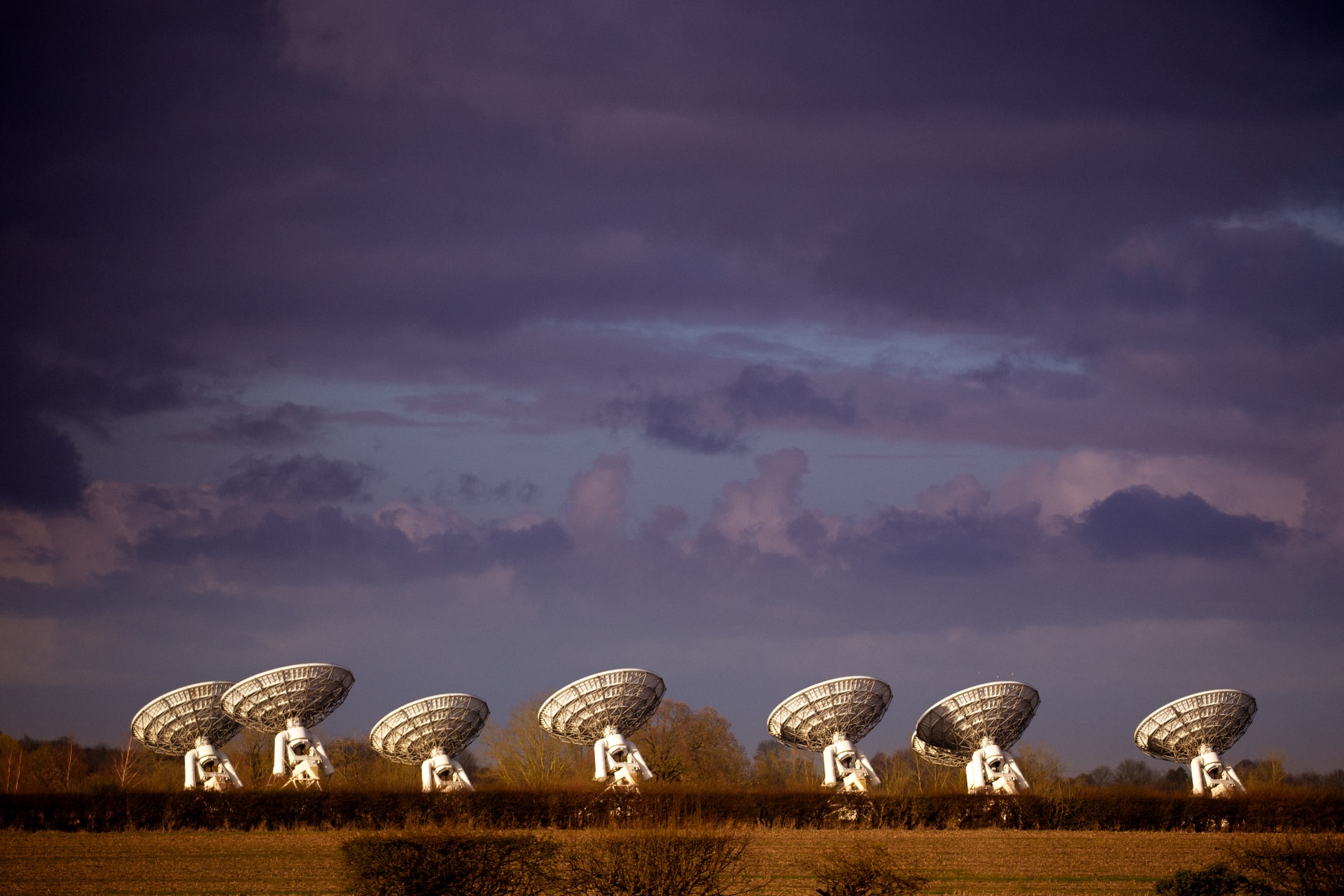 Photo by Ben Wicks on Unsplash