The National Congress complex in Brasilia, where the Senate is located
(From euamobrasilia.com.br)

It is with great pleasure that, after covering the hearing in the United States on May 17, I am going to speak here about another official hearing on UFOs, and I am even more pleased that for once it is not a U.S. event, but an event held in the Federal Republic of Brazil.
And this one in Brazil is also a hearing that it is no exaggeration to call historic, although it is historic in a different way.
First of all, this is a totally open hearing, with no closed-door sessions.
But the real difference is that this is a hearing where the speakers are not institutional figures or senior government officials but ufological researchers. This is a real first, something absolutely unprecedented. In addition to several Brazilian researchers were the Vice President of the ICER, Gary Heseltine, and former USAF Captain Robert Salas, who witnessed an episode of great significance: the deactivation of ten missiles with nuclear warheads that were under his control at the USAF base in Maelstrom due to a UFO. 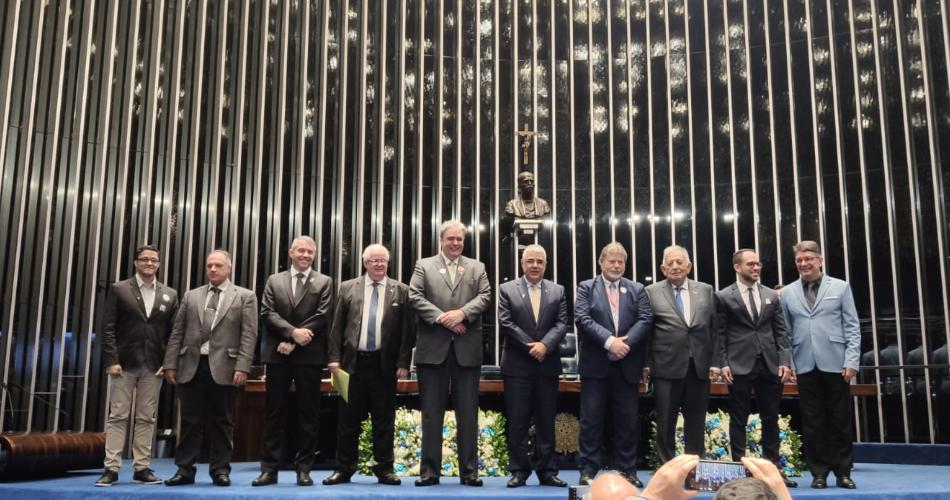 Group image of the speakers together with Senator Girăo (Da ufo.com.br)

Finally, this is an event that originated from the interaction, also entirely unprecedented, of an institution (the Senate of Brazil in the person of Senator Eduardo Girăo of Podemos-CE) with a private ufological research association (the Centro Brasileiro de Pesquisas de Discos Voadores - Brazilian Center for Flying Disks Research - in the persons of Ademar J. Gevaerd and Thiago Ticchetti). 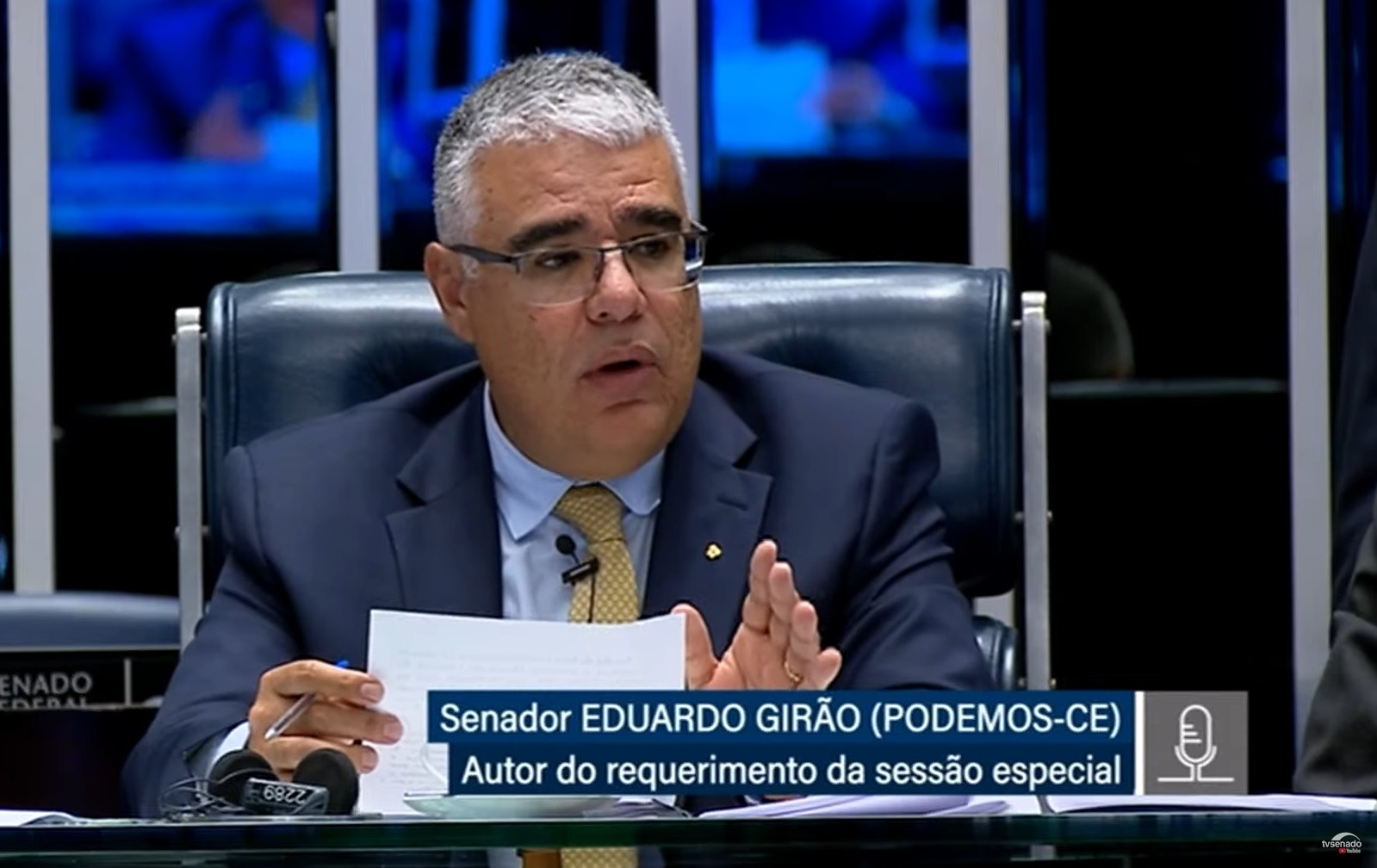 Senator Eduardo Girăo, promotor of the initiative
(Frame of the Internet streaming)

An event whose historicity lies precisely in having given voice in an institutional setting to private researchers of the ufological phenomenon, a clear sign of a 'shift in gear' in the consideration in which the UFO phenomenon, and those who study it privately, are held at the level of institutions. An event at which not only the need to take the UFO phenomenon seriously at the institutional level was rightly recognized, but also the efforts and commitment that the world community of ufologists has made over more than seven decades. Long decades in which ufologists (understood as private researchers of the UFO phenomenon) aware of the reality and importance of the phenomenon, were the only ones to seriously consider and study, even with the very modest resources at their disposal, a subject that everyone carefully avoided; long years in which they were mocked, shunned, taunted, marginalized and at best looked upon with pity.
It is therefore by no means an exaggeration to say that June 24, 2022 constituted a date of historic importance for the UFO/UAP phenomenon in general and for ICER in particular.
As ICER's national representative for Italy, I would therefore like to express great satisfaction with this historic event, held on the very day that we celebrate the 75th anniversary of Kenneth Arnolděs sighting, the event that conventionally marks the beginning of the modern era of the UFO phenomenon, in the prestigious Senate building of the Federal Republic of Brazil. 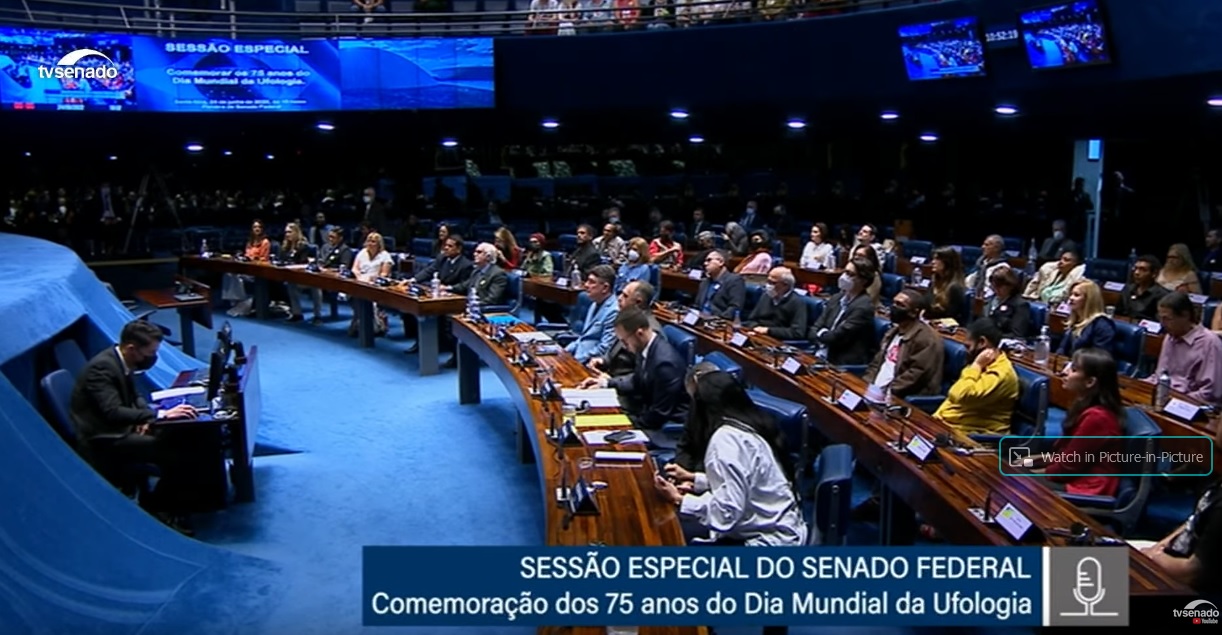 And while it is true that the event is of historical importance, it is equally true that it is not just a matter of prestige. It is concrete testimony to the changing times. And the participation of Gary Heseltine as Vice President of ICER, after only a little more than a year since its founding, is concrete testimony that civil society is beginning to make its voice heard. 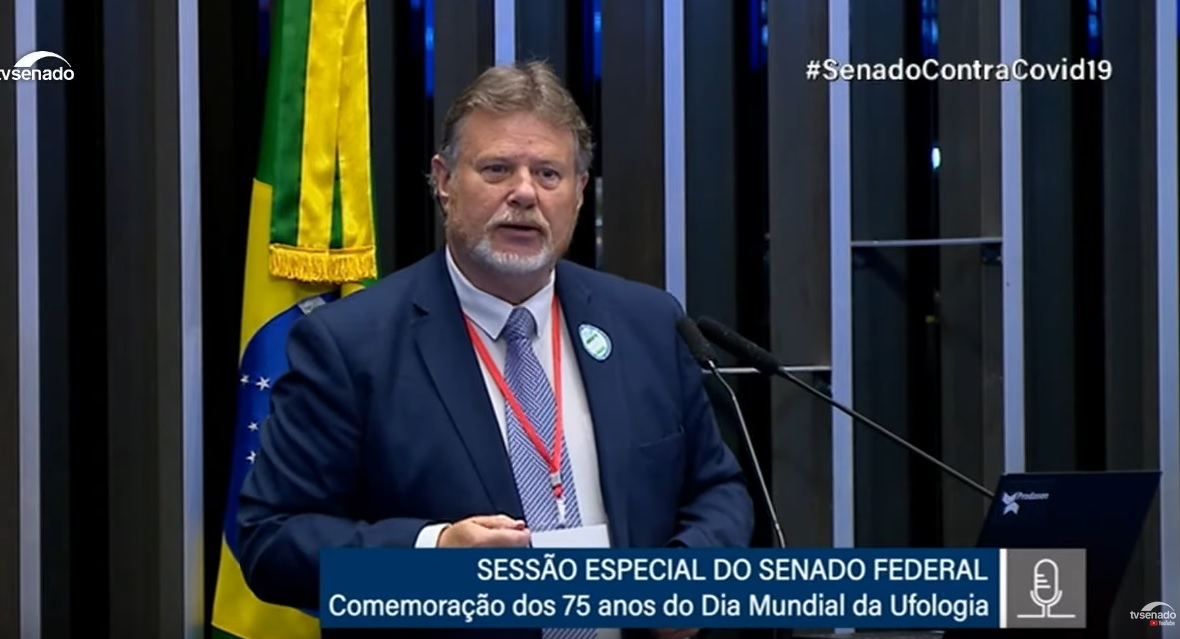 Gary Heseltine, ICER's Vice President, during his intervention
(Frame of the Internet streaming)

In fact, ICER is intended to be just that: the international voice of civil society on the phenomenon of unidentified flying objects (or aerial phenomena), because a phenomenon of such magnitude and fraught with enormous repercussions as UFO/UAP is must be brought into the light of day to be known by civil society, and this is a task that only civil society can accomplish, in its own interest. 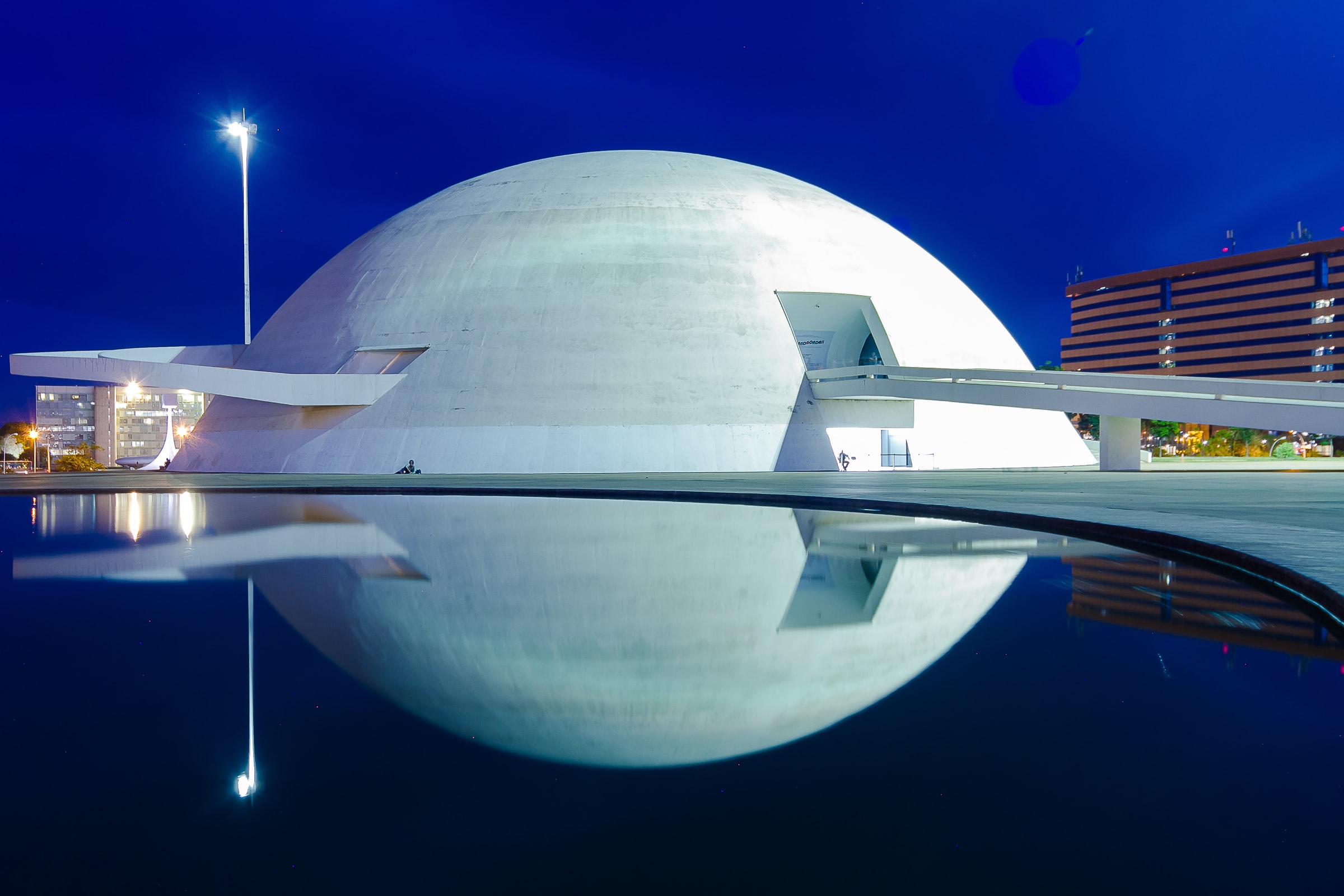 An image that cannot leave ufologists indifferent...
but it is the National Museum of the Republic, not far from the Senate complex in Brasilia
(Foto di Manoel Almeida on Unsplash)

In this unprecedented event where ufologists had for the first time a chance to express themselves in an institutional setting, concepts familiar to researchers but still unfamiliar to the general public resonated in the Senate chamber: the cover-up, the ill-concealed interest of military and intelligence organs in UFOs and their interference, the undeniable intelligence behind the manifestations of the UFO phenomenon, the equally undeniable interest of UFOs for any kind of nuclear assets, the Extraterrestrial hypothesis as the most likely explanation of the phenomenon, close encounters and the phenomenology of abduction. Important ufological events have been described, government documents shown, personal experiences reported.
And all this while the UFO/OVNI/UAP phenomenon continues to remain a mystery as to its causes, origins and significance, its reality and global scope are a concrete and indisputable fact, while the possibility (which seems decidedly concrete, although not confirmed at the moment) of its extraterrestrial or otherwise non-human origin carries implications of enormous magnitude for the entire civilization of this planet.
The mere fact that there exists even the possibility, however theoretical, of an extra-human origin of the phenomenon justifies and at the same time demands the attention of the highest fora of human association.
Well aware of this, ICER applauds this initiative, which fits perfectly with its intention to bring the phenomenon first of all correctly and openly to the attention of public opinions as well as to that of institutions. 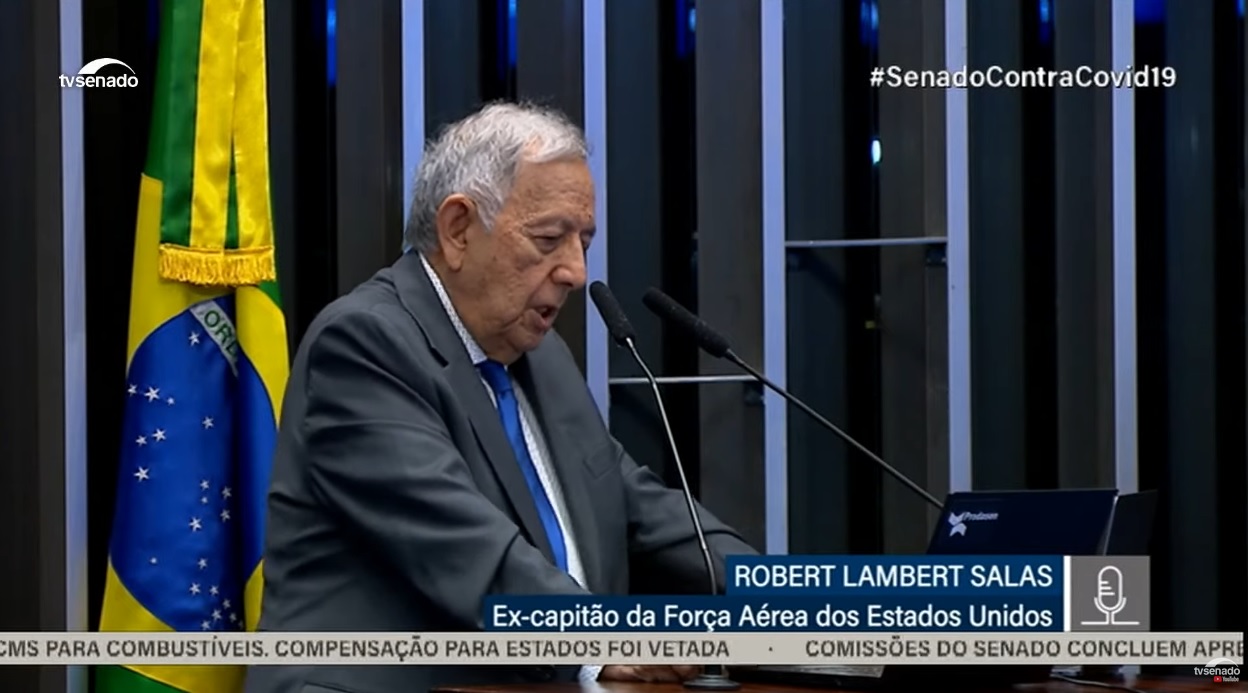 Former USAF Capt. Robert Salas relates the UFO event he witnessed while serving as a Launch Officer at MaelstromUSAF Base.
When will we see him testify before a US Congressional Committee? (Frame of the Internet streaming))

Before concluding, I would like to point out that the historic event in Brasilia was made possible thanks to the invaluable and tireless work of ICER's Permanent Representative for Brazil, Ademar J. Gevaerd, publisher of Revista UFO, the most important magazine dedicated to the UFO topic in the country. 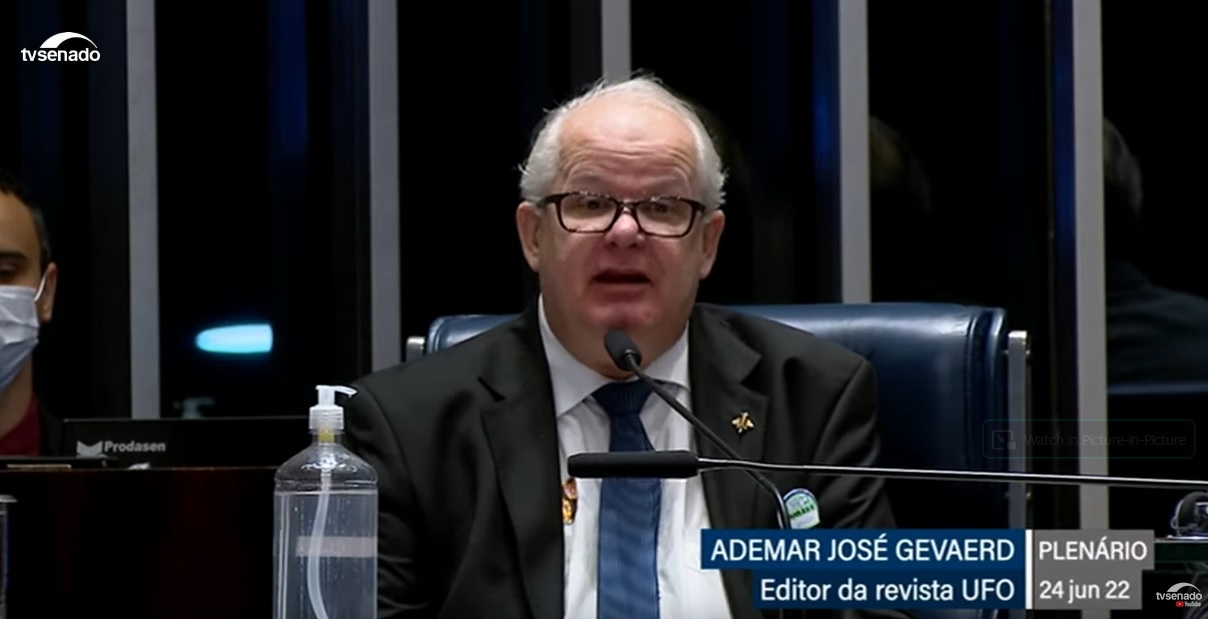 Ademar Josč Gevaerd, creator and editor of Revista UFO, ICER's National Representative for Brasil, in the course of his speech (Frame of the Internet streaming)

Coming to the end, I would like to conclude with the auspice that the historic hearing in Brasilia will set a useful precedent that can begin a virtuous spiral aimed at ensuring that more and more countries around the world begin to take the UFO phenomenon seriously at the institutional level and that the work of ufologists, understood as private researchers, in these long decades of 'cultural semi-clandestinity' is duly recognized.
And let us hope that this will also happen in Italy, where the CUN, Centro Ufologico Nazionale, and the CIFAS have repeatedly urged Parliament to do so, but to no avail at present.