Aerial view of the the Pentagon building, headquarters of the US Department of Defense (from Wikipedia)

Made news in recent days the press release with which the Press Office of the Department of Defense, or DoD, announced the creation of an office to take over on a permanent basis the functions of UAP/UFO investigation until now carried out on a temporary basis by the U.S. Navy Task Force for UAP, known as UAPTF.


There have been several positive comments in the press, generally praising the Pentagon for this deserving action. And indeed, to a casual or uninformed observer, the DoD action may indeed appear as such. The substance, however, is very different.


To fully understand the meaning and extent of this Pentagon action, it is necessary to examine the DoD's move by placing it in the overall context of the situation.

A gradual process of disclosure, or removal of secrecy about UFOs/UAPs, has been taking place in the US for about four years and is still ongoing. The process which is taking place in different levels.

At the military level, the process is being driven by the US Navy.


At the public level, it all began in late December 2017 with the revelation of the existence of an until-then covert UFO study project called AATIP and the millions of dollars spent on it. We met its penultimate director. We witnessed the first unofficial then official release of three videos made in US Navy showing three "real UFOs", later certified as such by the Navy. We heard public accounts of striking UFO encounters from direct military witnesses. There has been the creation of specific never-seen-before rules for UFO incident reporting by the Navy. And there has been the creation by the Navy of the Task Force for the study of UAPs (called UAPTF), which has produced an important Report, although preliminary and only partially public, on UAPs. 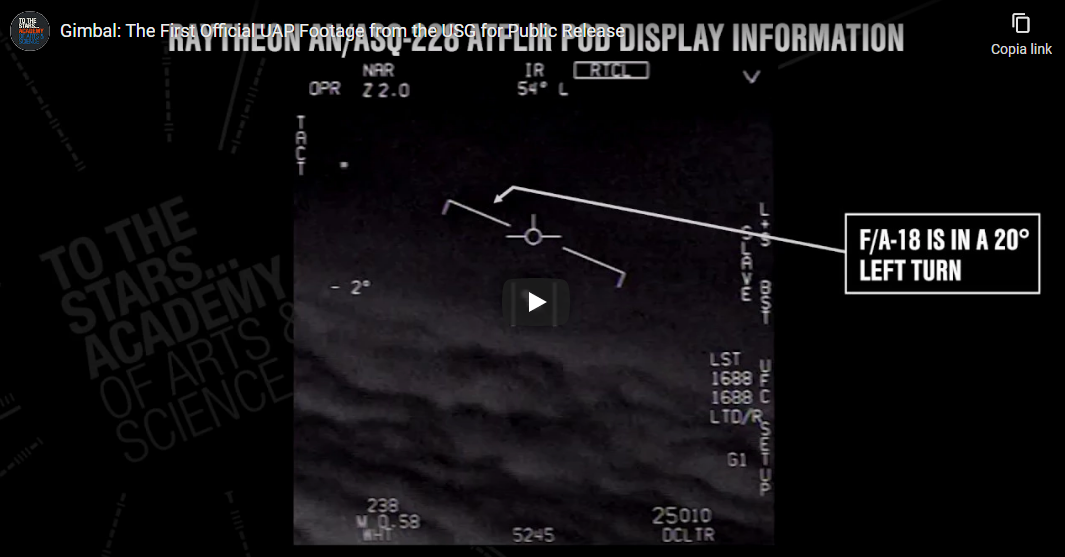 The video called 'Gimbal' in the Youtube channel of To The Stars Academy (from youtube.com)

Finally, it is worth mentioning the use of the term "extraterrestrial" by the acting US Director of National Intelligence, Avril Haines, during a recent interview. Even if the fact does not appear to be the result of a specific strategy, it is in itself unheard of since the term has always been carefully avoided on any occasion by people of that level.


At the legislative level we had the Intelligence Authorization Act of 2021 which among other things, gave the UAPTF the orders for the creation of the Preliminary Report mentioned above.


But it is with the Defense Activities Authorization Act of 2022, or NDAA22 , the legislative instrument that provides a legal basis for DoD activities, that important news comes. In fact, the monumental text of the law contains a small section, number 1652, in whose five pages significant news is packed.
The law envisages the replacement of the UAPTF by a permanent high-level office with cross-department competences to be created within the Office of the Minister of Defense, and establishes for it a series of duties. These duties are mainly aimed at the implementation of measures for the standardization and rationalization of the processing, circulation and analysis of information pertaining to UAP/UFO within the Department. There are also provisions for the monitoring and analysis of possible threats posed by state and non-state actors. In an unprecedented move, the rules also provide that the new office will interface with friendly and partner countries "for the purpose of better assessing the threat posed by UAPs".
The law also envisages reporting duties, including unclassified reporting, by the Pentagon to Congress on a wide range of activities (essentially statistical, risk assessment, and analytical). Within this range of activities there are a couple of firsts: the request for "an update on ongoing activities to capture or exploit unidentified aerial phenomena encountered" and "The assessment of health effects for individuals who have encountered unidentified aerial phenomena."


This law is by far the first project for a legislation aimed at laying the foundation for the development of a serious, organic and reasonably open investigation of the UFO/UAP phenomenon. Then came a substantial amendment introduced in November by New York Democratic Senator Kirsten Gillibrand. The amendment expands and improves the general framework of the bill. 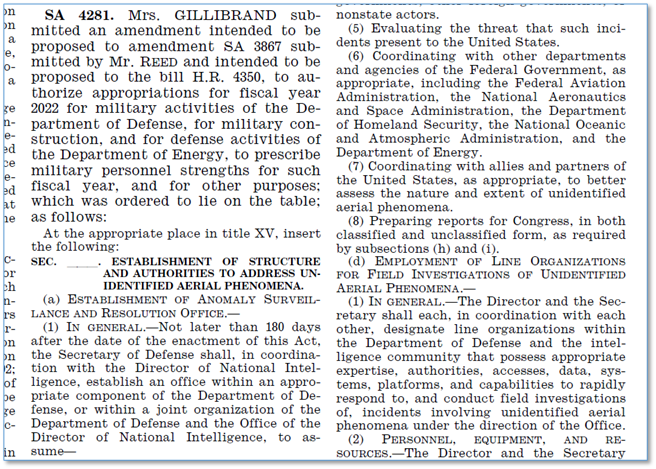 The amendment to NDAA22 introduced by Senator Kerstin Gillibrand. (from https://www.congress.gov)

The amendment further expands and refines the mandate of the new office, for which it provides the acronym ASRO, (Anomaly Surveillance and Resolution Office).
The amendment provides specific rules for field investigations, the most important of which are the ability of the director of the new office to use entities within DoD and the intelligence community for this purpose, as well as other entities, even non-military, to analyze the results obtained from field investigations.
There are provisions for acquiring as much data as possible on UAPs through intelligence tools and the related acquisition plans.
Provision is made for the office to operate on the basis of a precise scientific plan for the purpose of formulating theories that can shed light on the functioning of UAPs.
Provisions are also made for financing the operations of the new office.
Finally, there is provision for extensive information to be provided to Congress in unclassified form, but with the possibility of a classified attachment. Detailed information on a wide range of aspects pertaining to UAP phenomenology, with the addition (with respect to the original text of the law) of specific information on UAP events related to nuclear facilities are required.
In addition to the above information, the amendment introduces the provision for special classified briefings on a semi-annual basis to the Congressional Defense and Intelligence Committees.
But perhaps the biggest change introduced by the amendment with respect to the original text of the bill is the creation of the Airborne and Transmedia Phenomena Advisory Committee (ATPAC). The Committee will be composed of a maximum of 20+5 people who will have the task of advising the new office and its director in carrying out the activities of the institute.
Important to note here is the composition of this committee, which includes not only personnel from various U.S. government civil agencies and research organizations but, and this is a real new-one, also from private research organizationssuch as the Scientific Coalition for Unidentified Aerospace Phenomena Studies (SCU).
Provision is also made that in addition to the basic twenty people, the Committee may also include up to five additional people at the discretion of the Director, at least three of whom must not be employees of the federal government. 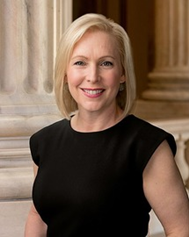 
In any case, it is important to note that if passed, the Gillibrand-amended NDAA22 Act would compose a well-conceived, organic, and far-reaching framework. For the first time ever we could have a truly coherent and comprehensive legislative framework that could allow effective, open and scientific study of the UAP/UFO phenomenon.

The creature of the Pentagon, known by its acronym AOIMSG, a product of its own initiative instead is a less organic and much more limited structure. Notwithstanding the two initial points of the characteristics as described above for the NDAA22 (high level office and cross-DoD competences), the tasks of the office are limited to UAPs observed in flight over special use areas, typically areas for exclusive military use for training or military bases. The AOIMSG task list also does not consider UAP activity over nuclear facilities, let alone aspects such as the biological effects of UAP exposure.

But perhaps the most significant aspects are first of all that the task list of the new office does not include any congressional briefing activities by the Pentagon and that the new office will be composed exclusively military personnel.
The document specifies that the new office will deal with UAPs for the purpose of minimizing risks to aviation safety and national security, and there is no mention of the UAP-nuclear connection, let alone of scientific research activities on UAPs.
Finally, the Memorandum of Establishment of AOIMSG does not include any detailed provision on the set-up of the new office and its funding, referring for these aspects to subsequent provisions to be formulated and proposed by its Interim Director.

Given the above, it does not seem out of place to say that overall the AOIMSG appears to be a poorly executed copy of ASRO. But apart the merit of the provisions in themselves, a factor that should not be overlooked is the timing. It cannot leave us indifferent that after more than seventy years in which it has always carefully avoided having anything to do with UFOs/UAPs (at least on a public level), the Pentagon has suddenly taken action at the very moment when Congress is in the process of defining specific and organic legislation on the subject.

Considering the general characteristics, and especially the shallowness of the project as a whole along with the suspicious timing of the action, the Pentagon's move appears essentially as an attempt (prepared with some haste) to sabotage Congressional action in order to maintain control over the UAP/UFO issue, or at least to continue to maintain as much control as possible.
Viewed from the military perspective, one can indeed understand how the Congressional initiative would deprive the military and intelligence establishment of the power and control over the UFO issue that they have always maintained.
Of course, the secrecy that has always been imposed on the UFO/UAP phenomenon does not allow us to know if there are really such important elements in it that make it a tasty morsel for the military to hold in its teeth, but if an entity like the Pentagon has acted in this way it is logical to assume that in the UFO/UAP issue there is indeed something very important , so important that they do not want to lose control of.

In this regard, it is also impossible not to notice that for at least fifty years the official Pentagon position has always been "since the end of Project Blue Book [1969] the Pentagon is not interested in UFOs". But if it is acting this way today, two things are obvious: first, that the Pentagon does care about UFOs (and therefore there must be something very important in the matter); and second, that it has knowingly lied for at least half a century.
Finally, reasoning from the point of view of the ufological researcher well aware of the historical events, it is difficult to avoid believing that the Pentagon's move was motivated only by the desire to maintain control over the UFO issue. While not defining himself as a conspiracy buff, this writer cannot help but imagine that in the more than seventy years of constant mystification, deception, repression and ignorance about UFOs/UAPs consciously implemented by the Pentagon a number of skeletons may have produced, and that the need to keep them locked in the proverbial lockers still continues.

In conclusion, it can be said that in line with the old adage which is the title of this article, it is difficult to define the Pentagon's move to create the AOIMSG as a positive and worthy action. But at least one aspect of the Pentagon's action is certainly positive: with this move, the agency that for over half a century has belittled, minimized, mocked the phenomenon has confirmed beyond any doubt that in the UFO, or UAP, issue there is really something important.